Dramatically fewer grants are going to young scientists. That’s a cause for alarm.

By Ronald J. Daniels and Paul Rothman (The Wall Street Journal) – Youth will be served, as the saying goes, but increasingly that’s not the case in scientific research. The National Institutes of Health reports that between 1980 and 2012, the share of all research funding going to scientists under age 35 declined to 1.3%, from 5.6%. During the same period, the number of NIH awards going to scientists age 35 and under declined more than 40%, even as the total number of awards more than doubled.

The numbers are similarly unsettling for the NIH’s premier research grant, called the R01, a highly competitive, peer-reviewed grant that supports independent, investigator-driven science. From 1983 to 2010, the percentage of R01 investigators under age 36 declined to 3% from 18%. Principal investigators who were age 65 or older received more than twice as many R01 grants in 2010 as those 36 and under—a reversal from 15 years earlier. The average age at which investigators with a medical degree received their first R01 grant rose to 45 in 2011, from 38 in 1980.

Considering that many of the most significant scientific breakthroughs were made by the 36-and-younger set—from Albert Einstein developing his special theory of relativity at 26 to James Watson at 25 and Francis Crick at 36 discovering the DNA double helix—we deprive young scientists of funding at our peril.

The reason fewer young scientists are receiving R01 grants from the NIH is not, as some observers surmise, because the researchers are securing alternative grants tailored to young investigators. 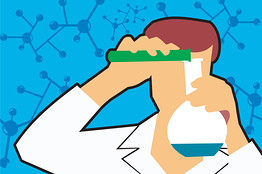 So what explains the tilt away from them? There are the long years spent in doctoral and postdoctoral programs or the technical requirements of the grant application. Or there is the length of the review process itself, as a closed system that disfavors the daring idea or the lesser-known applicant. This tendency is only more pronounced in an age of strained federal research funding: With a smaller pot of money to dispense, there is even less incentive to support the risky proposal or the new scientist.

Our most promising young minds find it more difficult than ever to ignite their own research. More young scientists are leaving laboratories for careers in industry. Some 18% of young scientists are considering leaving the country for positions abroad, where research funding is on the rise, according to a 2013 study by the American Society for Biochemistry and Molecular Biology.

The NIH has not sat idly by. The agency has launched special award programs for investigators within several years of earning an M.D. or Ph.D. It also has created a “new innovator award” for investigators with unusually creative research ideas, and designed special rules to direct more R01 funding to early career investigators. But none of the initiatives in place has succeeded in reversing the trend toward reduced funding for young scientists.

Many young scientists are not ready to lead a lab, and experienced investigators advance innovative research on a daily basis. And at least one recent study suggests that as the realm of knowledge has expanded, the age at which researchers can produce innovative science is inching ever upward.

Nevertheless, history has shown that it is often the youngest scientists who defy orthodoxy and shatter paradigms. We must recalibrate our research policies to fuel the promise of the most talented individuals of all ages, with solutions on three fronts: re-investment, re-examination and re-imagination.

First, we must restore the national commitment to funding scientific research. Over the past 10 years, the NIH has absorbed cuts in purchasing power in excess of 20%, and this overriding trend is the greatest threat to nascent scientists. As these funds are restored to the agency, a substantial portion should be invested in awards tailored to young scientists.

Second, we must re-examine the grant review process. The U.S. was the birthplace of peer review for research grants, and others adopted it to remarkable effect globally. This country should now lead in diversifying the pool of reviewers and, by this and other mechanisms, reduce the advantage of experience.

Third, and more ambitiously, we should re-imagine the NIH grant to alleviate the pressures that currently steer R01 funding away from young scientists. We could increase the availability of grants designated for young investigators, create a funding stream for smaller demonstration projects that allow new scientists to obtain preliminary data for an ensuing application, or fund a capstone award for experienced scientists to complete their lines of study and preserve the legacy of their work.

Other countries, including South Korea, Sweden and Israel, are pulling ahead of the U.S. in research and development investment as a percentage of GDP. These same countries are surpassing us in particular in their commitment to the next generation of scientists. China recently issued a strategic plan to build its science and technology workforce by cultivating 3,000 of the most talented young scientists over the next 10 years.

We will put our nation at risk if we fail to make a comparable commitment. If we miss out on investing in the next generation of scientists, we will miss out on their discoveries as well—and the benefits we all reap in improved drugs, technologies and jobs.