“AI-powered biotech has enabled the deployment of the COVID vaccine in record time, inspiring a paradigm shift in human health. With much investigation into the molecular basis for cancer underway, in combination with innovations in DNA sequencing, artificial intelligence, machine learning, and precision oncology, researchers are well-positioned to diagnose, treat, and cure cancer by considering a single patient as the entire trial,” said Pershing Square Foundation Trustee Neri Oxman. “Along with these promising new horizons in cancer technologies, we are excited to welcome a new generation of scientists eager to make an impact, one patient at a time, in record time.”

Applicants must have between two and six years of experience running their own laboratories by the award start date (July 2023), hold a PhD, MD, or MD-PhD (or degree equivalent), and be affiliated with a research institution in the greater New York City area. The greater New York City area includes New York City’s five boroughs, Long Island, Westchester County, New Jersey, and Western Connecticut (Fairfield and New Haven Counties). The deadline to submit a Letter of Intent is November 7, 2022 at 5:00pm ET. For more details on PSSCRA and the application process, including the full eligibility criteria, please visit: https://psscra.org/application/.

Now providing funding and support for 59 investigators at twelve academic research institutions, the highly competitive Pershing Square Sohn Prize underwrites the bold research of cancer scientists at a formative stage in their careers. In order to facilitate collaboration and innovation, each Prize winner is given access to leaders in the pharmaceutical and biotech industries and the opportunity to present his or her work to scientific, business, and philanthropic audiences.

“As we embark on the exciting tenth year of the Prize, we continue to be extremely impressed by the remarkable scientific talent in the New York City area. It is our goal to build a community of creative and skilled individuals and to support their exploration of the most exciting and revolutionary ideas,” said Olivia Tournay Flatto, PhD, President of The Pershing Square Foundation and Co-Founder and Executive Director of the Pershing Square Sohn Cancer Research Alliance. “The continued growth of the New York area’s life science research and industry relies on our ability to discover and support such new talent.” 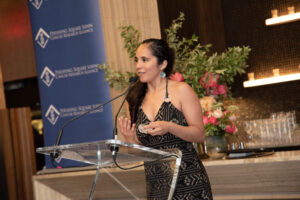 “I was thrilled to receive the news that I was one of the Pershing Square Sohn Prize winners,” said Soledad Sosa, PhD, a 2022 Prize winner who is an Assistant Professor of Pharmacological Sciences at the Tisch Cancer Institute at Mt. Sinai. “It was very exciting, because the project that we proposed is really high-risk, so there aren’t many mechanisms out there that could fund this type of interesting and exciting work.” 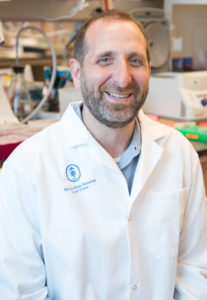 “What the Pershing Square Sohn Prize gave me was scientific freedom, which is perhaps the most important aspect of making novel discoveries,” said Richard White, MD, PhD, a recipient of the 2017 Prize, physician-scientist, and Associate Member at Memorial Sloan Kettering Cancer Center. “Whereas many grant programs are very restricted in what they will support, this award builds in the unexpected avenues that we all take as scientists, and fully allows us to go where the data takes us. Sometimes that is far away from what we first proposed, and that’s ok. Because of this, the Prize has played an instrumental role in my lab’s ability to make important and impactful discoveries in cancer.” 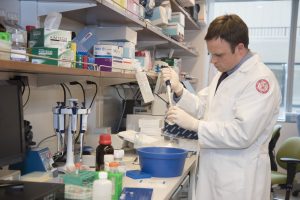 “The PSSCRA was a pivotal catapult to my early career and has led to pioneering work in a range of blood cancers, computational algorithms, and new therapeutic directions for engineered cellular therapies,” remarked 2016 Prize winner Chris Mason, PhD, Professor of Physiology and Biophysics and Director of the WorldQuant Initiative for Quantitative Prediction at Weill Cornell Medicine. Dr. Mason concluded his project in 2019 and has since then participated in PSSCRA’s application process as a member of the Scientific Review Council.

The Pershing Square Sohn Cancer Research Alliance was formed in 2013 by The Pershing Square Foundation, which has since committed more than $35 million to 59 scientists, in partnership with The Sohn Conference Foundation. The Alliance is dedicated to playing a catalytic role in accelerating cures for cancer by supporting innovative cancer research and by facilitating collaborations between academia and industry. Annually, the Alliance awards the Pershing Square Sohn Prize to early-career, New York area scientists who are engaged in cutting-edge cancer research. For more information, visit https://psscra.org/.

About The Pershing Square Foundation

The Pershing Square Foundation (PSF) is a family foundation established in 2006 to support exceptional leaders and innovative organizations that tackle important social issues and deliver scalable and sustainable global impact. PSF has committed more than $600 million in grants and social investments in target areas including health and medicine, education, economic development and social justice. Bill Ackman and Neri Oxman are co-trustees of the Foundation. For more information visit: www.pershingsquarefoundation.org.

About The Sohn Conference Foundation

The Sohn Conference Foundation supports cutting-edge medical research, state-of-the-art research equipment, and innovative programs. The Foundation raises its funds through the renowned Sohn Investment Conference in New York City and a number of premier investment conferences around the world.

More information on The Sohn Conference Foundation is available at www.sohnconference.org.