Over the past nine years, the Alliance has awarded over $35 million to 59 scientists at 12 institutions in New York, New Jersey, and Connecticut. With this funding, the recipients have contributed greatly to the New York City area’s growing biomedical research hub. In addition to funding, the Alliance provides Prize winners with opportunities to present their work to scientific and business audiences to encourage collaboration and help bridge the gap between academia and industry.

“Tackling the ‘frontline science’ of cancer research at record speeds demands the bold innovation and rigor embodied by this year’s cohort of Prize winners,” said The Pershing Square Foundation Trustee Neri Oxman. “Young investigators lead the way in asking hard questions that hold the greatest potential for transformative impact, and we remain committed to empowering their groundbreaking work.”

The winners of the 2022 Pershing Square Sohn Prize are: 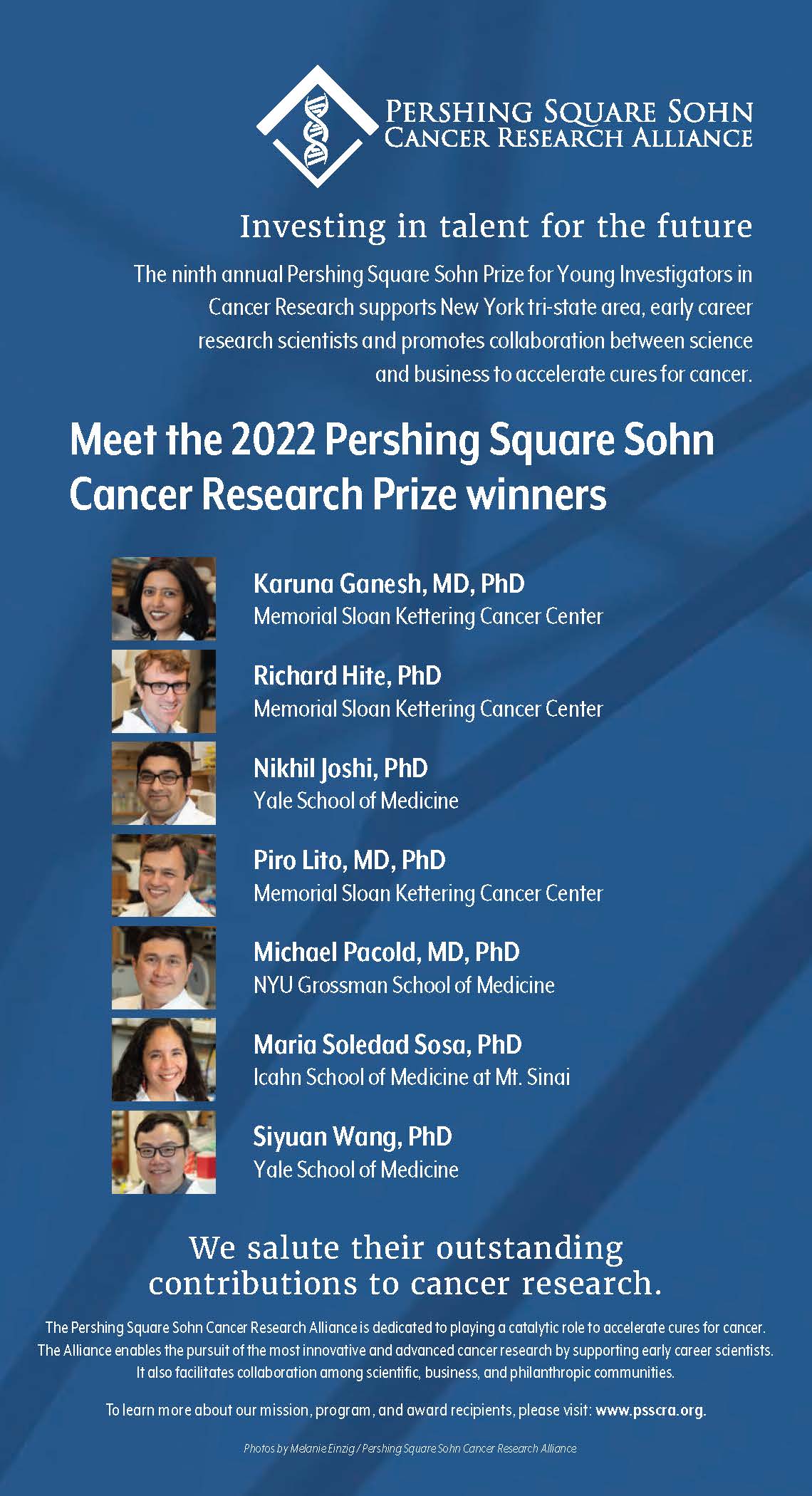 “We are continually inspired by the superb quality of the proposals we receive as well as the exceptionally talented researchers that are working in the greater New York area institutions,” said Olivia Tournay Flatto, PhD, Co-Founder and Executive Director of the Pershing Square Sohn Cancer Research Alliance and President of The Pershing Square Foundation. “It is our goal to build a community of creative and talented individuals, and to connect them with like-minded peers in pursuit of novel ideas, therapies, technologies, and, ultimately, knowledge that can further our understanding of disease and fundamental human biology.”

“The work to find new treatments and cures for cancer continues to be an urgent global health priority so we are heartened by the research approaches of this year’s Prize winners,” said Evan Sohn, Vice President of the Sohn Conference Foundation. “We are confident that with the passion, creativity, and insights we’ve seen from this group of scientists, they will make discoveries that will have a lasting impact for the patients for whom our Foundation fights.”

As part of the selection process, the Pershing Square Sohn Cancer Research Alliance relied on and benefitted from the guidance of a highly accomplished advisory board.

Additional details about the Prize winners can be found on the PSSCRA website at https://psscra.org/.

The Pershing Square Sohn Cancer Research Alliance was formed in 2013 by The Pershing Square Foundation, which has since committed more than $35 million to 59 scientists, in partnership with The Sohn Conference Foundation. The Alliance is dedicated to playing a catalytic role in accelerating cures for cancer by supporting innovative cancer research and by facilitating collaborations between academia and industry. Annually, the Alliance awards The Pershing Square Sohn Prize for Young Investigators in Cancer Research, which provides early-career, greater New York area-based scientists the freedom to take risks and pursue their boldest research at a stage when traditional funding is lacking. For more information, visit https://psscra.org/.